We are living through very strange times – and liver fluke is proving to be no exception, say the Sustainable Control of Parasites in Sheep (SCOPS) and Control of Cattle Parasites Sustainably (COWS) groups.

There was a relatively low and later than normal challenge in many parts of the UK throughout 2020, largely due to the legacy of the dry summer in 2018 and successive dry springs in 2019 and 2020 – but more recent weather patterns mean we are now starting to see evidence of fluke infection in some parts of the country.

Sub-acute cases in sheep, caused by migrating immature fluke, have been reported in North West England, and APHA has identified cases in the Midlands and Cumbria too. Positive fluke egg counts are also starting to be seen in the West of Scotland, indicative of the presence of adult fluke. 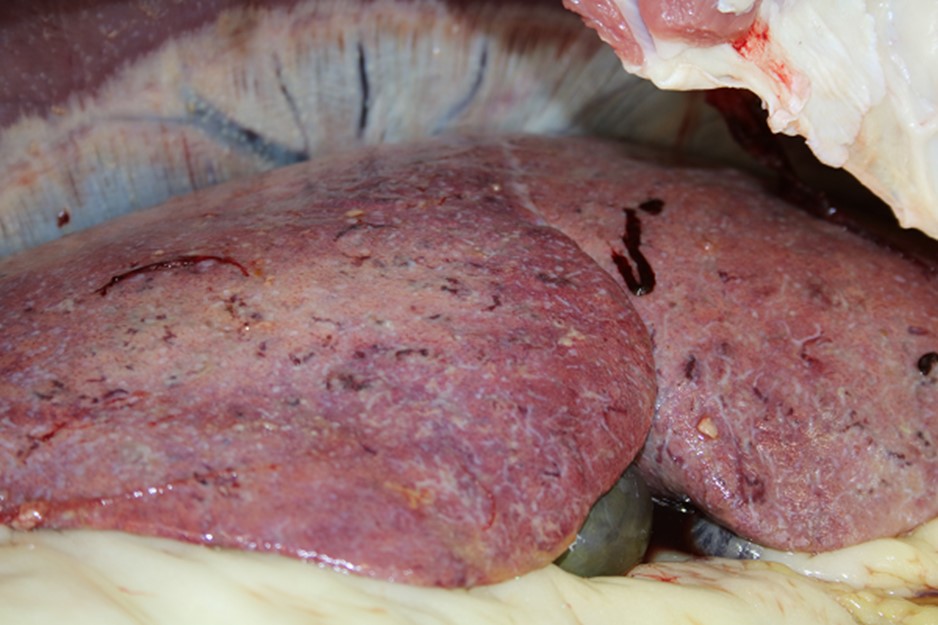 Sub-acute fluke in sheep – PM findings include blood clots in the abdomen and adherent to the liver, extensive haemorrhagic tracts in all lobes and visible immature fluke on the liver surface with many released on incision. Photo: Paul Holmes, APHA Shrewsbury.

The need to stay vigilant and keep using the tests available to monitor the situation on farms has never been greater, says experts from the two groups.

As an example, the University of Liverpool has tested first season grazing lambs and calves from across the country and seen significant regional variation. Even within a county there are differences between individual farms. And while farms from Wiltshire, North Yorkshire and Northampton have tested negative, farms from East Sussex and Exeter were positive. This highlights how important it is to test stock before treatment. There are also reports of coproantigen positives from Cheshire, the North of England and Scottish Borders. Different results can be seen in different groups of animals grazed on different parts of the farm, again highlighting the need to test before you treat.

Forecast. The NADIS liver fluke forecast said the dry September followed by a pretty rainy October meant liver fluke risk was predicted to be ‘high’ in West Scotland and Northern Ireland. North West England and North Wales were classed as ‘medium’ risk. However, like last year, it’s worth noting that November was actually very mild (albeit still relatively dry in most places) so development of fluke stages could have continued later into the year again, particularly further south. Temperatures in December were more typical and the current cold spell, with average temperatures well below 10oC, is expected to have more or less stopped any further development. Having said that, some parts of the country only had a brief cold spell then a lot more rain, with evidence of snail activity even in January.

How to test / options available. In the autumn fluke update, SCOPS and COWS advocated the use of serological i.e. blood testing to monitor infection in lambs and calves, because they were in their first grazing season and, therefore, good sentinels for infection. At this time of the year (mid-winter), most of the fluke are adults so the preferred option is testing of faeces using either the fluke egg count or the coproantigen test. These tests can be applied to any age or management group of sheep and cattle and are relatively straightforward samples to collect. Faecal testing from late autumn through to spring will tell farmers whether or not treatment is needed, and help guide the timing of treatment and product choice. It also provides an opportunity to see how well any treatment has worked with follow-up testing. For animals kept outdoors, regular testing would be best – it helps monitor the reinfection rate and can be a good indicator if retreatment is necessary. For housed animals a single test before turnout lets you know if there are any ‘leftovers’ from housing treatment.

Case study – Argyll, West of Scotland (Moredun & Livestock Health Scotland). This is a notoriously wet and mild part of the country so fluke is a perennial problem. Over the years, farmers have routinely treated with triclabendazole (TCBZ) in the autumn (and at other times) resulting in widespread TCBZ resistance. Regular faecal monitoring on Livestock Health Scotland study farms over the past few years has avoided use of TCBZ in autumn (or the need to treat at all, in some cases) and delay treatment with alternative products (closantel and/or nitroxinil) until well into the New Year. Brian, an Argyll farmer involved in the work, says: “Having been involved in sampling for the trial for the last three years, I’ve been able to better target when I dose my stock for fluke, resulting in money and time being saved from less routine dosing, and I now have a healthier flock.” His vet, Alison, says: “Timing of fluke treatments in the face of suspected or proven TCBZ resistance continues to challenge mid-Argyll farmers and vets.”

Treatment. If results come back positive, discuss with your veterinarian or RAMA which product to choose for treatment. The SCOPS/COWS treatment table can help to select the right treatment and optimise timing.

By testing before treatment, the RIGHT product can be selected to treat the RIGHT animals at the RIGHT time to give effective and efficient fluke control.

The SVS is the leading UK professional society who specialise in sheep health and welfare.

In joining our society you can expect information and support relating to sheep veterinary care including: access to our private members forum, and support from veterinarians experts for their interest and knowledge in sheep related care.